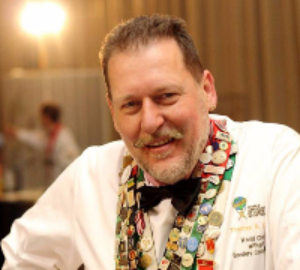 At the Worldchefs Congress 2016 in Thessaloniki, Greece, Thomas A. Gugler, was elected as the President for Worldchefs for the coming 4 years.
Previously Continental Director of Africa & Middle East), Gugler beat two other candidates to the Presidency seat.

The dynamic German national has played an instrumental role in Worldchefs. In his 3 years as Continental Director (Africa & Middle East),
he has steered and increased membership by 300% and established numerous chef associations. He also has decades of experience judging in Worldchefs competitions globally,
certified A category judge and is celebrated for his huge love for the hospitality industry.

Thomas is also a certified Executive Master Chef who has won hundreds of medals and awards as well as tokens of appreciation from all around the globe.
He works as the Corporate Director of Kitchens for AFS(Arabian Food Supplies) Naghi Group.
His Presidium includes: Martin Kobald (Vice President) Uwe Micheel (Assistant Vice President), Cornelia Volino (General Secretary) and K.K. Yau special assignment Liaison for Asia.”

He shares,  “We look forward to a fruitful cooperation with all our Continental Directors, the Office team, the Committee Chairs and Members and all the volunteers from around the world.
A special thanks to all the Country Presidents, their boards and as well to all the member country federations for their support.
We are committed to follow the direction that has been planted from past Presidents and to keep the legacy of Bill Gallagher alive. "
He concludes "We thank you for your confidence in us!"